Amy's car for the past 3y, mechanically lovely, cosmetically it has "character". She took it for a month's motoring & climbing in the Alps, and a regular triangle between Suffolk, Yorkshire and Liverpool.
She's now working at sea, and so her much loved car ("Stanley") is no longer required. 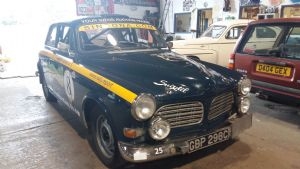 Video of the car is at our YourTube channel: https://youtu.be/iWudW_Puia0

Enginge rebuild in 2017 to rally spec, compression still excellent and the engine feels quick and strong,

It has the stronger late type suspension, all parts replaced 2017

Body was strengthened in 2017.

All brakes parts replaced in 2017

We built the car with Owen Turner and replace absolutely everything.

Its been on 2 South America Rallies since, but never used on P2P, as the owner decided to use a different car.

Car needs a good service after its South American adventure, and to be preped before its next rally.