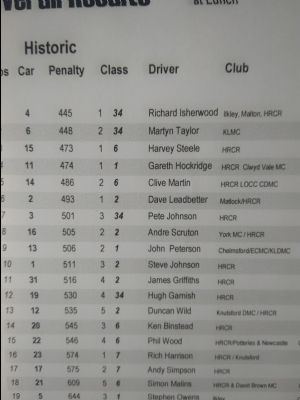 Amy arrived home from Liverpool on Wednesday, her driver Martyn arrived from Cumbria in their Astra on Thursday, and we spent Friday investigating why the Vauxhall has spent all its life with Martyn stalling.
Gareth's Volvo was ready and waiting for his arrival on Friday from Pwllheli - and the acid test of whether our work on keeping his engine bay cool had paid dividends: the forecast was for almost 30 deg on the rally.

The big attraction for several I spoke to was Matthew & Diane Mantle's Lotus Elan: under the bonnet it was immaculate, but outside it was wonderfully, um, patina'd in the extreme: truly a delight of originality, very desirable and very cool.

Also seeing Carrie & Bernard Northmore out in their 944 was a delight, since we started Historic at around the same time as Bernard.