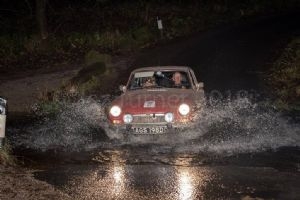 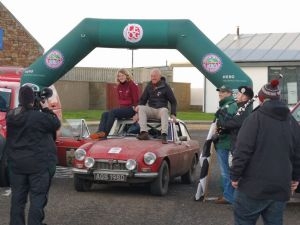 So LEJoG has come to an end, the last leg requiring the crews to be in their car for about 26h before being greeted by the Lone Piper at John'o'Groats. They had plenty of rest halts en route, but that's still a tough haul for the navigator in particular.

Scanning down the lists, I'm pretty sure all the Volvos finished the event: Amazons and 140's (no PV's have done this for a while now).

As for the event, Emma & I spent a lovely night in the Hundred House Inn from 2300 to 0230 on Sunday manning the out control: chatting to old friends and new crews alike, many of whom Emma hadn't seen in years. After that we had to make do with sporadic texts from Amy and watching on Google Earth the locations that the rally should have reached at various times.

Surely it's time to start putting GPS trackers (or simply track the crew's mobile phone) to make it more exciting for those of us armchair rallying?

Of course, whilst we were heading to Wales to enjoy ourselves as rally groupies, in the GGR Susie Goodall was wallowing in 5m southern ocean seas wondering whether she would be rescued. Happily she was efficiently lifted off her dismasted Rustler36, and is heading to Argentina now on the MV Tian Fu.