Half the Henchoz were competing on the Ilkley Jubilee Rally at the weekend: Martyn & Amy (Astra) had an excellent outing coming home 4th (1s separating them from 3rd overall); Gareth and I (Amazon) laid down good progress for the future, a loss leader I like to think, and 23rd overall.

I was privileged to have the loan of Mike & Margaret's lovely XK8 for the weekend, and thoroughly enjoyed the V8 burble for the two 5h trips, sitting on the A1M at the legal limit doing 2100rpm! A bit different to the PV544's 4800rpm at the same speed!

...was the best 8h of driving I can recall, it was superb from start to finish.

Specifically the Special Tests were flowing and easy to call, but challenging to drive to best effect - Martyn & Amy putting in some superb times including fastest time on one.

The Regularities - well now, Catterick hosted 3 of them, and as "private land" competitives they were unparalleled - we (along with many others) had to reverse briefly as we overshot a hidden control, but all 3 were a hoot.

The public road Regularities were also excellent, with some tricky speed changes.

Now let me explain our 23rd overall, and how I can claim that to be promising!

This was my first attempt at using the Curta in anger. On each of the first three regularities I tried to start using the Curta, but managed to muddle myself and reverted to the security of SpeedTimeTables, resulting in 3 top 10 performances, kind of where I would expect to be.

Then the private land Regularities, and I managed to use the Curta effectively, resulting in me telling Gareth to slow right down on one section that I would never have known about using the Tables - so clearly a step advantage over my previous 19y of navigating.

The the last 4 regularities I forced myself to rely on the Curta, and it worked really well except that I dedicated too much time to staring at the Curta rather than navigating, costing us 5 (I think) wrong slots, only brief, but unsettling for both occupants. However the power of the Curta to handle short intervals between speed changes is clear.

All I have to do is become as familiar with this superb bit of engineering as I am with the Tables...

As I walked out to the carpark to head home, Clive Baty stopped me to say how entertaining it was to watch Amy on the Special Tests: her mane of blonde locks would elevate to the horizontal like a halo, then flatten down again as the car hit solid ground once more. A delightful image! 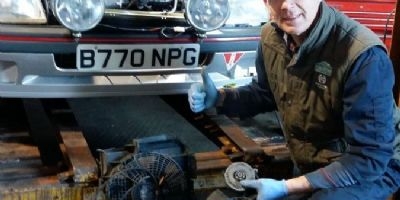